The Catalunyan parliament has unanimously approved the People’s Legislative Initiative (ILP) for urgent measures to take on the housing and energy poverty emergency. 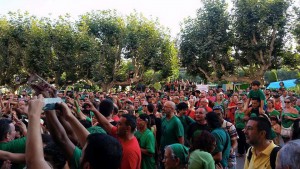 This comes as a great collective victory after years of struggle for the right to housing. It will allow mechanisms to be put into practice that end evictions and indiscriminate cut-offs to utilities, while also enabling empty houses to be put into use as social housing.

In a historic session on Thursday, the Catalunyan parliament approved the People’s Legislative Initiative against evictions and fuel poverty, which had been promoted by the Platform for People Affected by Mortgages (PAH), the Alliance against Energy Poverty (APE) and the DESC Observatory.

Different forms of ILP, a means of proposing legislature from outside the parliament, exist in all Spanish regional parliaments. Catalunyan ILPs require 50000 signatures to force a vote within the parliament. This ILP was processed in record time and with the support of every parliamentary group, except the Partido Popular which abstained on some points.

The approval debate was proceded by the intervention of two spokespeople for the People’s Legislative Initiative. In a forceful, emotional speech they summarised the long struggle that led to this moment: «we have reconquered our rights, we have disobeyed unjust laws and today we are here to change them». The spokespeople spoke directly to the members of the parliament, demanding that the parliament maintains the high ambition it demostrated in approving the initiative to ensure that all the bill’s measures are urgently deployed and that sufficient resources are provided for them to be effective.

The ILP approved by the parliament contains a variety of measures that attempt to respond to the current housing and fuel poverty emergency in Catalunya. In light of the scale of the emergency, and the lateness in legislating to stop this brutal bloodletting, the ILP was processed with extraordinary urgency: in just a fortnight we have been able to complete all the formalities that made today’s vote possible. It must be pointed out that all parliamentary groups have kept their promises respect both to tempo and content.

In coming days we will explain the effects of this new legal tool in depth. The articles of this new law wholly respect the objectives and effects sought by the original draft, but it has been refined, adapted and even improved to, at long last, put the vital measures included in this bill (named the «Law of urgent mesasures to confront the emergency in the sphere of housing and fuel poverty») on the table. The bill approved today has impeccable judicial rigorosity, w made possible by the legal work of the group promoting the bill, but also thanks to suggestions of the Catalunyan parliament’s judicial services team and of the parliamentary groups.

The law approved today in the Catalunyan parliament is more than just a declaration of legal intentions: it is a battery of useful, effective tools to put a halt to the housing crisis in Catalunya.

Measure 1. Mechanisms that grant a second opportunity to over-indebted people and to good-faith debtors. Two procedures (one extrajudicial and one judicial) have been created that will allow families to liquidate debts associated with their primary residence in order to start afresh.

Measure 2. No more evictions for families suffering mortgage foreclosure. The establishment an obligation for financial entities to concede a social rent to families at risk of finding themselves without any decent housing option.

Measure 3. Social rent for families in rented housing at risk of eviction, with an important distinction between small-scale and large-scale landlords. When the landlord is a financial firm or a large-scale landlord, they will have to stop the eviction and offer the family a social rent.

Both large-scale landlords and banks attempting to evict families from mortgaged or rented property will face fines of up to €90 000 if they fail to offer them a social rent, a fine already partly defined in Catalunyan law 1/2007 on the right to housing.

Measure 4. Creation of a new social housing body. This will enable empty homes belonging to finance firms and large-scale landlords to be ceded to a public supply of social rented housing. This creates an important means of putting into use the large stock of empty housing, which in time will allow the rehousing of families evicted without being offered a housing alternative.

Measure 5. Guaranteed access to basic utilities (water, electricity and gas) and guarantees to stop the cutting-off of water, gas and electricity to those in residential exclusion. A new protocol will oblige the authorities to apply the necessary support measures to prevent the cut-off and, when the cut-off is due to a lack of economic resources, to ensure access to these utilities while the family remains in a situation of residential exclusion by establishing agreements with utility companies.

This law puts an end to life-long debt; ends mortgage and rental evictions; guarantees the right to rehousing in social housing and basic utilities for all homes; and puts empty homes to use to fulfil their social funtion.

The ILP is both a essential emergency law and a starting point: it sets an important precedent in establishing the right to basic services so as to move towards a more just model of access to housing and services.

The ILP’s approval has only been possible thanks the untiring work of many people affected by this emergency; by the volunteers, activists, organisations and collectives that have supported it. We, the organisations that promoted this bill, do not want to hide our satisfaction at this success, a the culmination of more than six years of struggle for the right to decent housing. We can’t forget our comrades across the Spanish state without whom we wouldn’t have been able to reach this point. This ILP can’t stay just in the Catalunyan parliament: it must generate a domino effect in the other regional parliaments, whose have a duty to act faced by an incapable state government that has been captured by the power of the banks and the energy oligopoly.

The 23rd July 2015 will go down in history as a day in which citizens, tired of the breach of human rights and of injustice, after a long path of denunciation and self-defense of fundamental rights, took it upon themselves to draft a law that will protect them and put their rights before the profits of the few.

One of the dreams of the PAH when it was born in 2009 (in Barcelona) was to change unjust laws and to create just ones that protect fundamental rights. We have made this longing a reality. We will keep moving forward, because although an important step has been taken in achieving the right to housing, we still have a long walk ahead of us.

Today has been a historic day: we have demonstrated that the common sense of the streets can enter parliaments hand-in-hand with organised citizenry to create laws that transform unjust realities and that defend the fundamental rights of the people.

PAH’S HOUSING LAW IS VISUALISED IN THE EUROPEAN PARLIAMENT