Saltar al contenido
afectadosporlahipoteca@gmail.com
Who is the PAH?
The  PAH is a citizen’s movement focused on the right to housing. It was  created in February 2009 in Barcelona. The main aim of the PAH is to  denounce the dramatic situation faced by thousands of families who are  unable to pay their mortgages and are facing foreclosure and evictions  as a result of the financial fraud of 2008. We seek to make housing fair  and accessible to all.
What we do
The  PAH demands political solutions from government and public  administrations, but since they have been excessively slow or  unable/unwilling to provide them, we have taken action in order to  safeguard our rights. The PAH is a political movement (but not linked to  a political party) in which people directly affected by the mortgage  crisis and those indirectly affected by it, fight together against this  problem. We take actions in many different fields (political, legal,  communicative, emotional, etc.) in order to empower people and promote  legal changes. We also propose solutions in order to enact our right to housing. We have three basic and non-negotiable demands:
1)     Cancellation of mortgage debt upon handover of the property to the bank;
2)     Immediate stop of all evictions where it is the family home and sole property;
3)     Transform empty houses held by financial institutions into social housing.
Given  the centrality of mortgage debt to the expansion of financial  capitalism in Spain, the PAH has come into direct conflict with the  banking sector as well as the government which prioritizes the financial  industry above all else.
How we do what we do 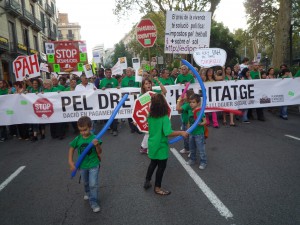 The Stop Evictions campaign  is a strategy to prevent families from being evicted from the only  place they have to live, their homes. Before the eviction day, we use  all institutional mechanisms available to delay the eviction and put  pressure on the bank. These include talks and negotiations with the  bank, collective actions against financial institutions, outreach to  public administration offices that can mediate and provide social  housing in the event of an eviction, campaigns and calls to action  through social networks and mass media support to increase visibility of  our actions and petitions. If none of this works, then we resist the  eviction by physically blocking the building or door of the property of  the family in question. We make a public callout to anyone able to come  to block the legal authorities and the police from effectively carrying  out the eviction.
Obra Social campaign  is the freeing up of empty houses held by financial institutions in  order to relocate families that have been evicted or have lost their  home to the bank and have nowhere to go. The campaign denounces that  while in Spain banks are starting foreclosure processes and accumulating  empty houses, thousands of evicted people have no place to go while the  Government refuses to give real solutions. Thus far, fourteen building  have been recuperated by the PAH and 712 people have found housing  through these actions.
The People’s Legislative Initiative (ILP) campaign  was a legislative proposal advanced by the PAH with the collaboration  of various social movements and other organizations in order to change  Spain’s foreclosure law. Even though an ILP in Spain needs only 500.000  signatures in order to be put before parliament, the PAH collected  almost 1.5 million signatures. Sadly, the Spanish Government did not  give it enough importance and refused to discuss the proposal. This gave  way to the Escrache campaign in order to put pressure on Government.
The Escrache campaign  is meant to persuade politicians and other people in positions of power  to take into account the public’s petitions. By publically rebuking  them at their work place or their homes, the PAH tries to communicate a  message from thousands of people suffering from the decisions (or lack  of) that they take with regards to housing. Diverse non-violent actions  are carried out, like showing signs, chanting, or giving out speeches of  people explaining their situation to politicians and asking them to  vote favourably for the ILP. Regardless of all this campaigning  government did not vote in favour of the ILP, but this is not the end;  we will continue fighting for the right to housing and to change Spain’s  mortgage law.
The PAH International Committee of the PAH is the working commission seeking to engage with pro-housing affinity groups, collectives and  organizations across Europe and beyond. Well  aware that predatory and fraudulent activities in the financial and  mortgage industries are not exclusive to Spain but ongoing across the  globe, we hope to continue to contribute to a growing coalition of  grassroots activists and organizations fighting for the right to fair  housing. This  committee emerged as a response to increasing interest in the work the  PAH has been carrying out for the past five years in Spain. Please feel free to contact us at pahinternacional@gmail.com