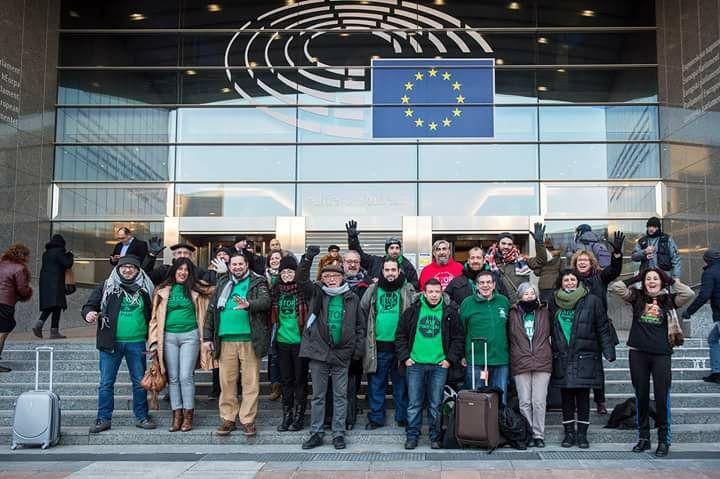 The PAH (Spanish acronym for Platform of Mortgage Affected Victims) has had to go to the European Parliament in Brussels to let MEP’s know about the housing emergency that the Popular Party (PP) led government tries to hide. In the Spanish state there are 173 evictions every day. More than 5 million households suffer energy poverty due to not being able to afford utility bills. And up to 7,000 people die every year because of energy poverty. There are lives at stake, which are on the borderline, while the PP government blocks any and all initiatives aiming to protect the Right to Housing. During their mandate they have blocked up to 7 laws that came from Autonomous Parliaments. They have deregulated rental prices and the party went as far as to sell 1,860 public housing units to the Blackstone vulture fund in Madrid. Even the United Nations ruled that human rights in the housing sector are violated in the Spanish state. Moreover, recently the UN has drafted a report stating that the Spanish government fails the test on rights of children, unprotected in face of evictions and energy poverty affecting them.

We are aware that the PP government attends international forums, such as the European Parliament in Brussels, where they list all the reforms they have made in terms of housing. But the very committees following up on the laws that the PP government has enacted agree that that all together these laws have not been able to provide solutions to more than 1% of the affected families. In the Spanish state, the PP government has declared war on the most basic rights. During all this time, the affected families have found solutions organising and mobilising themselves. Since the creation of the PAH in 2009, the citizens have stopped thousands of evictions by putting their bodies in front of affected people’s homes. We as the PAH have rehoused 4,000 people in vacant bank-owned apartments through protest actions and have even managed to collect more than 90% of social support for our demands.

Being aware first hand that things can be changed, PAH has registered a legal text in the Spanish Congress known as Ley Vivienda PAH (PAH’s Housing Law): if enacted, it would end evictions, regulate rental prices and guarantee access to basic utility services such as water, electricity and gas. Ever since it was officially registered, every day more actors join in defending the need for this law to be passed. Hundreds of trade unions and social movements have adhered to the text of the law. More than 100 City Councils have approved motions in favor. Within Congress, there is already a majority of parliamentary forces that support the processing of this law. As if that were not enough, even the UN Special Rapporteur on Housing, Leilani Farha, said that this legal text is a world example to guarantee the Right to Housing.

In a true democracy, PAH’s Housing Law would be debated and approved. The government of the Popular Party, led by Mariano Rajoy, vetoes any bill that is not to their liking to prevent debate in Congress. Despite being a minority government, which accumulates the largest number of corruption cases in the entire European Union, the government could prevent democratic dialogues from taking place in the Congress. According to the Congress regulations, a government can only exceptionally veto a law if it affects the current budget. However, PAH’s Housing Law does not affect the current budget at all. It is designed so that measures which may affect the budget are postponed and implemented in the following fiscal year.

More importantly, it is a law that forces institutions guilty of the current situation to dedicate resources to solve the emergency: banks should offer social rents and utilities should guarantee access to water, electricity and gas for vulnerable families. It is a law that would put an end to the perverse logic of transferring public resources to private entities. However, it would not be the first time that the PP government vetoes a law without any justification. Only in the last legislature, the PP government has vetoed more than 40 bills. Almost half of vetoes made during Spain’s democratic regime have taken place during PP’s last two years in office. And this violation of democracy has been possible because the PP has the support of a political party called Ciudadanos (Citizens), who even being aware that the PP government bypasses the rules of Congress, always vote in favor of all its vetoes.

Aware of this reality, from the PAH we have requested a meeting with the PP government . We have tried to explain to them that there is no reason to veto PAH’s Housing Law. In fact, the PP is taking an antidemocratic drift when they arbitrarily decide whether a law is debated or not, when there is a Congress maintained by the citizens precisely for the debate of laws. We have also publicly questioned Ciudadanos, explaining that if they did not support the government, even if the PP registers a veto, PAH’s Housing Law could be debated. But until now they have remained silent.

That is why we are going to the Parliament of the European Union. An institution created to protect democracy and human rights. An institution that in fact, has already stated that we are right countless times. The Court of Justice of the European Union has ruled up to 8 times that the Spanish mortgage law is anomalous, illegal and violating the most fundamental rights. Also the European Court of Human Rights has ruled that it is illegal to execute evictions without a housing alternative. We come here so that the voice of affected families can be heard by members of many countries. So that the debate that the Spanish government wants to silence in its own country can begin beyond the borders of the Spanish state. To make public the fact that there are solutions that families, more exemplary than the government, are proposing as of right now.

The citizens of the Spanish state are demanding to put on the same level in terms of rights as our European neighbours. We want to be able to rent homes like in France and in Germany. We want a public housing stock for rent like the one existing in Austria and Sweden. We want there to be mechanisms against unpayable debts like United Kingdom citizens enjoy. We want there to be an authentic democracy, where the voice of the families is kept in mind, where proposals of law can be debated, where the Spanish Constitution is respected and where international agreements on human rights are fulfilled.

Although we do not have an easy task ahead of us, the families constituting PAH will mobilise. We will not allow the government of the PP and its ally Citizens to continue pretending that there are no alternatives. And for that reason, after this visit to the European Parliament, we will go on March 3rd to Madrid, the capital of the Spanish state. Families from different parts of the state will join together with groups, social movements, unions and associations to point out to the person with the biggest responsibility for the current state of affairs: the Spanish president, Mariano Rajoy. While the government is silent, citizens are on the move.