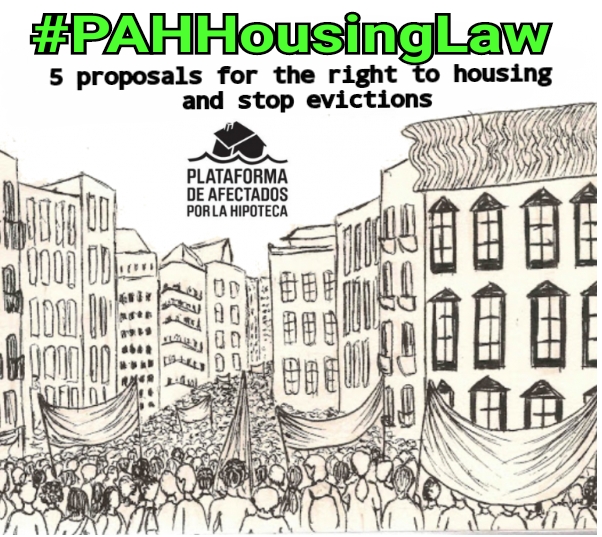 They said that it had no place, but after nine years of struggle, the PAH´s demands will be brought before the assembled Congress this September. A gigantic step to make the Right to Housing a reality in Spain.

At last the PAH Housing Law will be submitted to the Congress for consideration in the next plenary session on Tuesday September.18. The PAH Housing Law was registered nine months ago on January 13, endorsed by the parliamentary groups of the political parties Unidos Podemos (United We Can), ERC (Catalonian Republican Left), EH-Bildu (Basque Country Gathering) and Compromís (Compromise). After having been vetoed by the previous government of the PP, the law was again pushed forward after the High Court of the Constitution (Tribunal Constitucional) ruled OUT the veto, since this law did not affect the national budgets as the Government claimed, and not having been vetoed by the actual Government, the Parliamentary Group of Unidos Podemos comprised of Podemos (We Can), En ComúPodem (In Common We Can), IU (United Left), En Marea (Tide for Change) and Equo (The Green Party) will take it to the plenary session.of the Congress.

The Popular Legislative Initiative (ILP) we took to the Congress in 2013, backed up by 1.5 million signatures, was transmuted by the PP into the Law 1/2013. That transmutation was reviled by the European High Court of Justice (CJUE) on several occasions. Now we return with a law prepared by the affected families that addresses the current problems globally; those of access to housing in Spain: evictions, life-long indebtedness, lack of public housing, rents and energy poverty. The PAH Housing Law must overcome the process of being taken into consideration by the PSOE (Spanish Socialist Workers Party), PNV (Basque Nacionalist Party) and PDeCAT (Catalonian European Democratic Party) if they fulfill their commitments acquired with the PAH and vote together with the groups that have already guaranteed their registration.

From 2013 until today, there have been more than 700,000 evictions in Spain due to non-payment of mortgages and, in recent years, this figure has been increased by rent evictions. Home purchase prices are again rising at rates closing on those that created the housing bubble. Rents rise at a much higher rate. Vulture funds do not cease to hoard housing while we continue without a park of public housing, generating thousands of families that live in precarious conditions. Each year about 7,000 people die in accidents derived from energy poverty, and this without counting the suicides caused by the anguish of losing the home.

We hope that the representatives of the citizenship are up to the task and able to go further than just to take all this into account. We want it processed with speed and fidelity to the original text, as required by the housing emergency we suffer. We take this opportunity to remind José Luis Ábalos, Secretary of State for Housing, of his commitment to meet with the PAH to comprehensively address issues related to the Government’s housing policy. We await the date of this meeting.

The road has been long, but our steps have been firm. Organized civil society has not surrendered to the abuses of power and the systematic violation of a right as basic as that of housing. Soon, we will have reached 10 years since the PAH started, with conviction and clear determination, to put an end to the criminal and unjust laws we have in this country.

The objective is clear: to guarantee the right to a roof for everyone as our Constitution dictates.

Today is a historic step, the result of the work of thousands of families, who from the street, fought the politics of fear and guilt and raised their heads to move forward without taking a step back, to defend and win the rights of all.